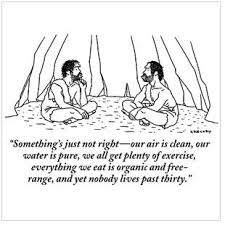 As a practitioner of the paleo diet (although not perfectly), I get a lot of questions about it.  One of them was aimed more at the philosophy of it.  “If it is so great, why did they not have as long a life expectancy as we do?”  I suppose this is a fair question given the claims of the Paleo Diet.

There are many factors that go into computing life expectancy and diet is only one of them.

1. Life expectancy also takes into account the infant death rate.  Remove this death rate and you actually get a fairer picture of what a group of people’s lifestyle and technology does to their life expectancy.  Along with this is mothers who die giving birth due to complications.  Modern medicine has caused these two problems to diminish significantly.

2. Environment – No, I am not talking about pollution here but the fact that modern man has learned to shield himself from the elements better as well as generate heat and cold better than our prehistoric brothers.  There are also the perils of hunting itself.  When I practice my Paleo Diet I head to the grocery store and buy my meat and veggies.  My ancestors had to grab a bow or spear and go kill something and some of those somethings had claws and horns.  In those situations, the hunted can become the hunter and even if it does not kill you a wound can be just as lethal.

3. Lack of Knowledge About Infection – this leads to of course how many people died from a lack of having germ theory or a proper understanding of what causes infection.  They also lacked the understandings of what to do when infection sets in.  Modern pharmacology did not exist and what did exist in the form of medicine was trial and error with herbs and superstition.  In the Paleo world a small cut could lead to death.

I could on and on about all the things that affect life expectancy, but these are the ones that jump to mind immediately.  The point we paleo people are trying to make is simple.  You don’t see the rapid plaque build up in the arteries, tooth decay and shorter weaker people in paleo societies.  You see them in modern agricultural ones.  You see it when grains and sugars become the staple foods instead of the occasional find by the gatherers.  Anthropologists simply do not see diet causing the early death of the paleolithic people or even tribal people of today.  We do see that in our modern one however.

It seems then that the best avenue for longer and healthy life is to combine the modern medical understandings of the human body with the diet of the past that our bodies are designed to accept.  That way the best of both worlds combines to make us healthy and stronger.  It may also be the key to extending our lives a little bit farther.